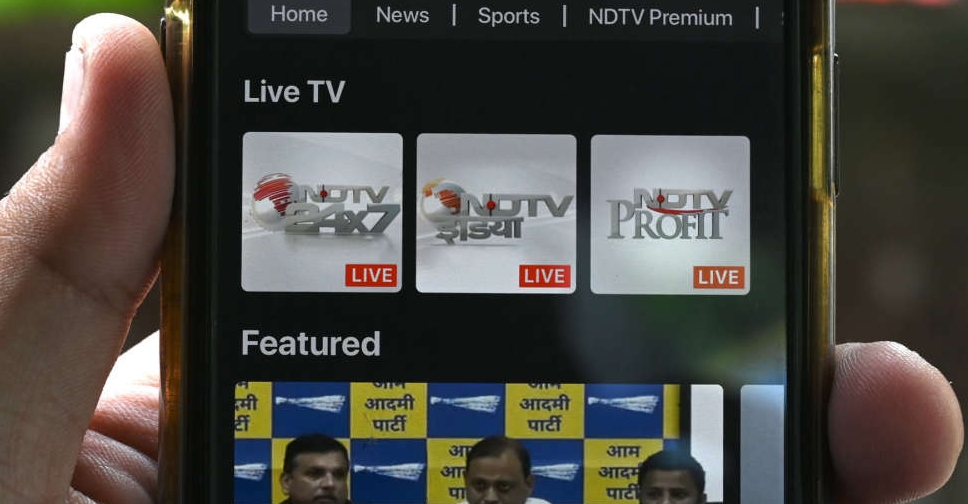 Shares in India's NDTV jumped the maximum permitted 5 per cent to a 14-year high on Wednesday, after billionaire Gautam Adani's conglomerate moved to take a near 30 per cent stake in the media group that could eventually lead to it taking control.

New Delhi Television's (NDTV) shares surged far beyond the price Adani Group said it would pay in a subsequent mandatory open offer that could take its stake over 55 per cent.

Some analysts said investors were hoping Asia's richest man would put money into the struggling network.

"All TV channels have been suffering financially, and NDTV suffers a bit more because their rivals are aggressive marketers," said N. Chandramouli, CEO of TRA Research.

"Markets may be reacting because the sentiment is that someone with money is coming in," he added.

Regarded as one of the few media groups that often takes a critical view of the ruling administration's policies, NDTV said late Tuesday that Adani Group's move had come "without any input from, conversation with, or consent of the NDTV founders" Prannoy Roy and Radhika Roy. Read full story

"The developments ... are totally unexpected," senior NDTV official Suparna Singh told employees in a memo reviewed by Reuters. "We are in the process of evaluating the next steps, many of which involve regulatory and legal processes."

Some NDTV journalists told Reuters on the condition of anonymity they were fearful of job cuts and losing their editorial independence if Adani Group gained control.

Spokespeople for the Adani Group and NDTV, which currently has a market value around $300 million, did not respond to emails seeking comment.

BATTLE OF THE TYCOONS

Adani Group is exercising its right to buy a 29.18 per cent stake in NDTV based on a loan agreement with the NDTV founders in 2009-10 under which a company now owned by Adani can buy the stake from a company owned by the Roys.

As such, four Indian lawyers contacted by Reuters, who declined to be named, said Adani Group was well within its legal rights in the deal process so far.

Adani Group's interests include coal trading, ports, power and edible oils, and in March it made its first bet in the media sector by taking a minority stake in local digital business news platform Quintillion.

Moving on NDTV could set the stage for Adani to face off in the sector with fellow tycoon Mukesh Ambani's Network18.

The stake purchase would leave the Roys with 32 per cent of NDTV, but would also trigger an open offer from Adani for another 26 per cent, in line with regulations.

NDTV stock jumped to as much as 388.20 rupees on Wednesday, its highest since August 2008. The Mumbai exchange does not allow the stock to rise more than 5 per cent in a day.

However, Adani has said its open offer would be 294 rupees per share, well below the current market price and valuing the extra 26 per cent stake at about 4.93 billion rupees.