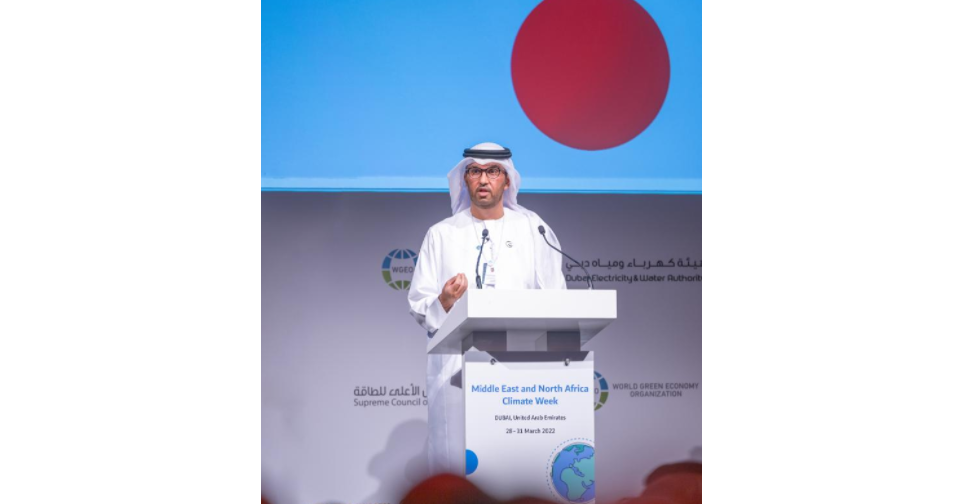 Speaking at the Middle East and North Africa Climate Week (MENACW2022), Dr. Al Jaber explained that the UAE is adopting a comprehensive, balanced and proactive approach to climate action and the energy transition that delivers sustainable economic growth.

"As a young country, and a responsible energy leader, the UAE has always faced the future with a positive mindset, and addressed challenges head-on. This is why we stopped flaring 30 years before the World Bank asked the industry to do so," said Al Jaber.

"It’s why we achieved 0.01 percent methane intensity 20 years before the global pledge asking for a gradual reduction. It’s why we began to capture C02 (carbon dioxide) on an industrial scale before the UNFCCC (United Nations Framework Convention on Climate Change) called it an essential tool for de-carbonization.

"And it’s why we became the first hydrocarbon producer to power our operations with zero-carbon energy," Dr. Al Jaber said.

He pointed out that the UAE was also the first country in the region to sign and ratify the Paris Agreement, the first to commit to an economy wide reduction in emissions and the first to announce a Net Zero by 2050 Strategic Initiative.

The UAE has chosen to lead in these areas, because it views climate challenges "not just as problems to fix, but as opportunities to seize," according to Dr. Al Jaber.

While the world mobilises investments for a new energy economy and addresses the climate challenge, Dr. Al Jaber emphasised that recent events have "reminded us that we cannot simply switch off the current energy system."

"We all need to recognise that the energy transition will take time and require sober, thoughtful planning. It is more evident now than ever before that this cannot be rushed. The push to divest from hydrocarbons has led to a supply crunch that is having the biggest impact on the most exposed. The clear lesson is that we should not adopt climate policies that lead to energy poverty. We need to keep investing in low-cost, low-carbon energy that can provide the baseload power that the world relies on," said Dr. Al Jaber.

Dr. Al Jaber had reiterated this message during his speech at the Atlantic Council Global Energy Forum held at Expo 2020 Dubai.

On climate finance, he said it can be an effective tool for climate action as he urged the international community to do more and fulfil the $100 billion climate pledge made to developing nations over a decade ago.

"The international community continues to fall short of the $100 billion climate finance pledge they made to developing nations over a decade ago. We need bold targets going forward and we need to start treating climate risks as potential global security risks.

"We have taken a partnership approach focused on projects in countries most exposed to climate risks, because we know that local resilience builds global resilience. We have provided over $1 billion in climate aid to more than 40 countries. And our experience tells us that once concessional finance is there, private finance will follow."

He concluded by extending the UAE’s invitation to governments, the private sector, financial institutions and civil society to partner on solutions that make sense for our climate and the economy. He said "we should not have to choose between the two. We can and we must make progress on both."