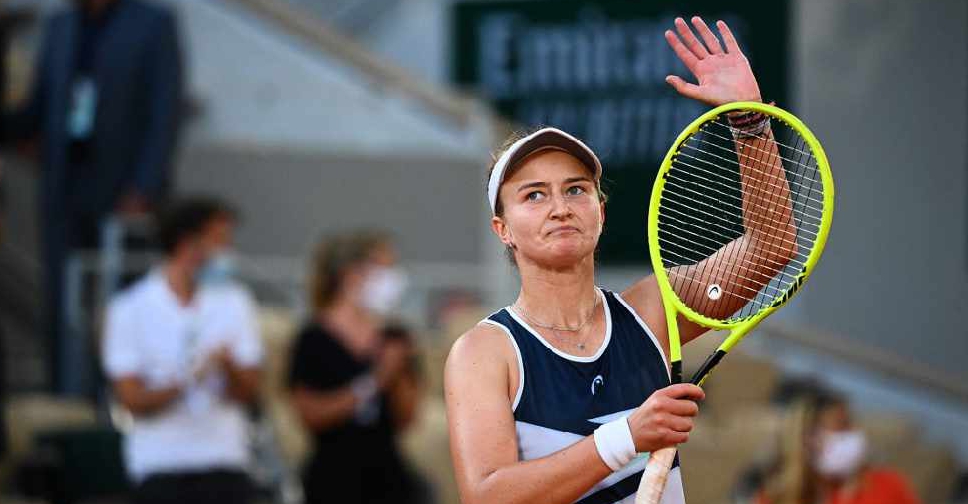 Czech Barbora Krejcikova reached the French Open final as she beat Greek 17th seed Maria Sakkari 7-5 4-6 9-7 on Thursday in a nail-biting, see-saw contest in which she saved a match point and overcame a wrong line call that held up her celebrations.

Krejcikova dragged herself back from the brink of facing a match point at 3-5 in the third set and then rode an emotional roller coaster when she thought she had booked her place in the final before a wrong line call went against her.

She recomposed herself, however, and eventually put the marathon contest to bed after three hours and 18 minutes.

The world number 33 had struggled with nerves throughout but proved more consistent than Sakkari, who got tight when she served for the match at 5-4 in the third set when both players finally raised their game.

Krejcikova will face Russian 31st seed Anastasia Pavlyuchenkova, who will also be making her maiden appearance in a major singles final, on Saturday.

She will be looking to emulate fellow Czech Hana Mandlikova, who won the title at Roland Garros in 1981.

"When I was young, a junior, I wanted to play matches like this, such challenging matches. We both had our chances," said Krejcikova.

"Even if I had lost today I would have been proud of myself. I was just fighting, that's the most important."

"I have to be deadly honest: I got stressed, started thinking that I'm a point away from being in the final. I guess it's a rookie mistake," she said.

"Good thing is that if I give myself a chance again to be in that position, then I know that I don't have to do it again."

With both Sakkari and Krejcikova playing in their first Grand Slam semi-final, the match got off to a shaky start.

Sakkari was the first to hold serve on a sunbaked court Philippe Chatrier to open a 3-1 lead but her advantage was short-lived.

Krejcikova, who came into the semi-final on a 10-match winning streak after claiming the title in Strasbourg last month, rallied back as Sakkari lost her way in the sixth game.

Krejcikova then broke for 5-3 with a superb lob as she retrieved a drop shot, but dropped serve straight after with a double fault on game point.

She sealed the opening set with yet another break, however, when Sakkari's crosscourt forehand went wide after clipping the net cord.

Sakkari raced to a 4-0 lead in the second set but Krejcikova cancelled out one of the two breaks of serve to narrow the deficit to 3-4, only for the Greek to serve it out, letting out a huge scream out as she sent the contest into a decider.

Krejcikova saved a match point on her serve at 3-5, forcing Sakkari to serve for the match.

The Greek fell 0-30 behind after two unforced errors before saving a break point with a sizzling crosscourt backhand winner.

She was broken, however, when she sent a backhand into the net to allow Krejcikova to level for 5-5.

Serving at 6-7, Sakkari saved three match points. Krejcikova thought she had it in the bag on her fourth match point at 7-8 when Sakkari's forehand was called long, only for the chair umpire to rule it was in.

TV replays showed that the ball was actually out but no harm was done as Krejcikova ended the contest on her fifth match point with a backhand winner.